Finally, another book review! I decided to have a change and write about a comic/graphic novel, since I have been reading a LOT of these recently. 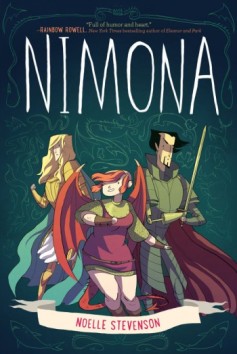 Before I get into the main review, I should say that I’m a huge comic fan. Web comics, paper comics, Image, Marvel (a tiny amount of DC). I’ve become almost as addicted to them as normal books. Which is impressive, as I haven’t been into them for nearly as long. I have noticed that there are few women involved in the comic world so when I found something that sounded right up my street in terms of genre and humour, the fact that it was written and illustrated by a woman gave it an extra boost for me.

Apologies. I’m getting ahead of myself.

Nimona is a standalone (for now) book based on the web comic Noelle Stevenson made of the same name. It’s rare I find many standalone comics that really grab me as they usually need to be a series to build up the character background to pull me in. This isn’t the case with this book, and the characters have stayed with me long after finishing.

To sum up the story quickly, without giving the plot away: Nimona is about a young woman of that name who declares herself side-kick to an evil villain Lord Ballister Blackheart. She wasn’t exactly what he had in mind for a side-kick but considering she can shapeshift, he decides to give her a chance. I mean…who wouldn’t? Their mission: to cause havoc and show the secrets of Sir Ambrosius Goldenloin and the Institution he works for.

Nimona is completely (perhaps overly?) enthused about his vendetta, and is always trying to push his schemes further than he actually ever planned. Both characters have interesting pasts that have led them to where they are, and neither of them expects what they find out about the other.

The story is compelling, funny, gripping and incredibly silly but has the ability to pull hard at your heartstrings when you least expect it. I’m reluctant to say too much more about the plot itself as a lot of the magic of the story is in the surprises. But the things I particularly enjoyed are:

I have to include part of the blurb on the back of the book, as I don’t think I can describe it any better (which is terrible for a writer to admit):

Hopefully, I’ve given you enough detail to convince you to read this fabulous graphic novel, you absolutely won’t regret it. If you read it and are desperate for more, as mentioned above, read her Lumberjanes series, and I can also recommend a series by Kurtis J. Wiebe called Rat Queens. I am attempting to work on a similar review for that but as you might have noticed, I’m somewhat erratic with my posts, so go read it now if you like humour, battles, women being kick-ass, and mercenaries.

Next post is going to be another ‘serious’ one, so I hope this has made a nice change of pace.

The Ramblings of a Foolish Northerner

Wanderlust: There and Back Again

A blog about chemistry in real life

Helping to find your next great read . . .

we interact, we love, we create

4 out of 5 dentists recommend this WordPress.com site

A 21 Year Old's Story About Her Microtia Surgeries

mental health and goblins and stuff

Blogging for a Good Book

A suggestion a day from the Williamsburg Regional Library

The latest news on WordPress.com and the WordPress community.